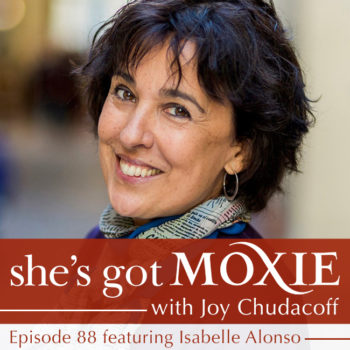 Isabelle Alonso has a colorful life as an entrepreneur, feminist and author. She has published four feminists essays and seven novels including her latest novel Je Peux Me Passer De l’Aube (I can hold on without the dawn). Isabelle also appears regularly on the television series Je t’aime etc… where she is a commentator on culture and current news events.

Today’s show is a real treat as Isabelle tells us about her journey working towards women’s equality in France. She reframes the role of women in the workplace, what being a “feminist” actually means, the most powerful thing that a woman can do and much more.

It is an individual adventure. But I really think that for women, they have to start with themselves.” – Isabelle Alonso

All of the myth of the reality of masculinity is a prison for men.” – Isabelle Alonso

Joy Chudacoff is the leading expert for business success and design for women. Founder of Smart Women Smart Solutions®, Joy specializes in guiding already successful businesswomen from where they are to where they want to be.

Leading by shining example, Joy provides guidance and support to help women live their greatest desired potential. Joy is heralded as “The Coach for Women” in the millennium and she has x-ray vision when it comes to helping women discover their big ideas, dreams and goals. Joy draws from her own life and business experience to lead women in achieving success personally and professionally — on their own terms. Whether you are a new business owner or have been in business for a few years, Joy has easy, proven programs that you can take advantage of to get everything in life that you want and deserve.